The book, fully illustrated with photographies, compile, through a gazeteer with a lot of details about geography, mesoclimate and history, a list of twenty-six beautiful oak wood forests, as the forest of Tronçais.

Tronçais is a celebrated, iconic forest that one enters with a sense of awe. Coopers and winemakers pronounce the name with a respect that is echoed in all four corners of the world. To walk through its 10,500 hectares (26,000 acres) is both to enjoy a close encounter with history and to receive more than one lesson in geography. Legend has it that one can catch a glimpse of Colbert himself among these age-old trees, but it is a myth without foundation, for in reality the Secretary of State to the King’s Household never set foot in the Tronçais forest. Though it grew into the finest oak grove in all France under his influence, he never visited it.

In 1665, the Fleury brothers were dispatched by the Masters of Rivers and Forests to appraise the situation on the ground. After having a ditch dug to mark its limits and setting up 1,061 stones as boundary markers, their report was damning. The forest had been laid waste by unauthorized cutting and 3,000 arpents (1,500 ha, or 3,700 acres) had been ransacked or converted to meadow. Innumerable pigs and cattle, as well as horses and mules, browsed on the young saplings, preventing all regeneration. The great reformation launched by Colbert in 1669 thus strove to limit felling strictly to trees of at least twenty years old. Thirty-two saplings were kept per hectare (thirteen to the acre), while a quarter of the surface area that by then had been reduced to 9,000 ha (22,240 acres) was to be preserved.

The arrival of Théophile de Buffévent fresh out of forestry school in Nancy in 1832 marked a turning point. Since charcoal was no longer used to stoke the forges, he was able to impose a system of even-aged growth, and established plant nurseries. Twenty years before Baron Haussmann was carving boulevards and streets through Paris, the Count of Buffévent sliced paths and roads through the Tronçais forest, radiating out from fifty-nine starshaped intersections to the 443 plots of the forest. “On the eve of 1914, three-quarters of the trees were still less than 100 years old, while today approximately one third exceed that age,” Loïc Nicolas, ONF officer for Tronçais, emphasizes. “There is nothing natural here, it’s a cultivated forest,” he continues with a grin, “with an annual harvest of 55,000 to 60,000 cubic meters (1,942,000–2,119,000 cubic feet) of which a quarter has potential as stavewood.”

Evaluating this potential is quite an art, one in which Eric Leporcq excels. A timber buyer for Charlois, he spends all year evaluating oaks, standing or felled. “At wood auctions, only one bid is allowed, so there’s no room for error,” he told us, “even if one tends to overpay for Tronçais because it remains a benchmark the world over. Winemakers from Burgundy to Bordeaux, and Asti to California all know the Tronçais name.” The exceptional character of this national forest is derived from both the unique climate and the rigorous silviculture deployed. Ensconced between two rivers, the Allier to the east and the Cher to the west, and crossed by two others, the Marmande and the Sologne, the forest of Tronçais boasts five splendid ponds and enjoys an annual rainfall between 800 and 900 mm (31½–35½ in.). The soil is composed of sandstone and granite, with sandier silt to the east, at altitudes ranging between 260 and 360 meters (850–1185 feet). This is an excellent terroir for oaks, which represent 93% of all trees here, and 90% are sessile, slightly less tannic than the common oak… 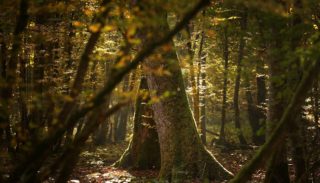