The book, fully illustrated with photographies, compile, through a gazeteer with a lot of details about geography, mesoclimate and history, a list of twenty-six beautiful oak wood forests, as the forest of Paimpont.

The forest of Paimpont bears several names according to whether you speak French or Breton (Coat Pempont), while those who prefer legend to land registers call it Brocéliande. A legendary forest imagined by Chrétien de Troyes in the late 12th century, it continues to resound to the exploits of the Knights of the Round Table and the adventures of Arthur’s half-sister, the enchantress Morgane le Fay. Megalithic sites, including the “tomb of Merlin”, give added weight to the historical reality. Likewise, the Guillotin oak (1000 years old and 10 feet in diameter), which is said to have sheltered a recalcitrant priest during the Revolution.

The Hindrés oak, the beeches of Pontus and the Traveler (Voyageur) are other remarkable trees in this forest that stretches over 9,000 hectares (22,240 acres). With the lion’s share in private hands and open to the public only from April 1 to September 30, the forest belongs to a score of different owners, including descendants of Louis Levesque, who purchased it from the Count of Paris in 1875. The national section to the northeast covers scarcely 10% and is managed by the ONF. The whole is composed half of broadleafs (30% oak and 15% beech), and half of conifers. The proportion of pine is explained by the poor soils of moorland and peat bog, which make the massif especially vulnerable to fire. With an altitude attaining 250 m (820 feet), in places the relief is dug out into small enclosed valleys, as in the Val sans Retour in the west, lined in red schist.

Paimpont is not much in demand with coopers, save for Jean-Baptiste Floch, at Douarnenez. “I make 400 liter (1051⁄2 gal.) casks for the Warenghem distillery in Lannion which makes an excellent Breton whisky, Armorik. I also work with Marc Pasqualini of the ONF on splendid oaks from the forest of Cranou in the Finistère.” The forest of Teillay, 2,300 ha (5,680 acres) southeast of Rennes, similarly private, is on the other hand much sought after by stavemakers, who appreciate the fine grain of its oak (82%). Oddly, Teillay means “place planted with lime-trees”! 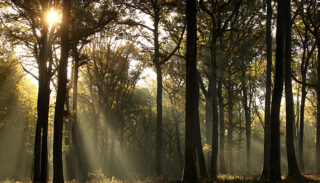