In the forest of Blois, the last remnant of the ancient forest of Blémars that until the 13th century covered most of the Tours part of the Gâtine, the sessile oak is dominant to the tune of 100%.

The book, fully illustrated with photographies, compile, through a gazeteer with a lot of details about geography, mesoclimate and history, a list of twenty-six beautiful oak wood forests, as the forest of Blois.

In the forest of Blois, the last remnant of the ancient forest of Blémars that until the 13th century covered most of the Tours part of the Gâtine, the sessile oak is dominant to the tune of 100%. The monks of the abbey of Marmoutier had started clearing and exploiting it two centuries earlier. Long property of the counts of Blois, it was later sold to Louis I of Orleans whose grandson Louis XII ascended to the throne of France in 1498. It was then incorporated into the royal domain, before becoming a national forest in 1791, following the Revolution.

The wooded avenue of Louis XII, and that of his wife Anne of Brittany that cross at the middle of the forest, testify to its rich historical past. Today it covers some 2,750 hectares (6,795 acres) of loamy soil composed of clayey siliceous formations—that is, a poor soil better suited to woodland than to agriculture. Located on the right bank of the Loire and downstream from the city, this oak grove of Atlantic type receives an average of more than 700 mm (27½ in.) of rain a year, and sits at an altitude of between 80 and 143 meters (260 and 470 feet). 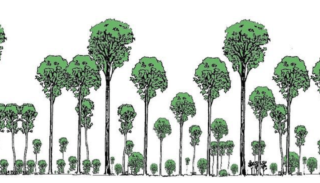