South of the Sarthe, between Tours and Le Mans, the national forest of Bercé, that the stavemakers dub Jupilles, is one of the finest oak forests in all of France.

The book, fully illustrated with photographies, compile, through a gazeteer with a lot of details about geography, mesoclimate and history, a list of twenty-six beautiful oak wood forests, as the national forest of Bercé.

South of the Sarthe, between Tours and Le Mans, the national forest of Bercé, that the stavemakers dub Jupilles, is one of the finest oak forests in all of France. Located on a plateau over the valley of the Loir, its 5,400 hectares (13,300 acres) are made up of two-thirds sessile oak, though there is also beech, birch, and pine. Bercé is heir simultaneously to the ancient Gaul woodlands of the Carnutes and to the old royal forest that once furnished timber for the navy. Today, more peacefully, its oaks supply the most famous cooperages in France, and it is a “premier grand cru” in oak terms. Its limestone subsoil overlaid with silt constitutes an ideal forest terroir, except in the west where poor soil plays host to pine. A masterpiece of nature and the fruit of several centuries of silviculture, Bercé is cross-crossed with numerous forest tracks that intersect at star-shaped crossroads. Its oldest section, the grove of the Clos, dates to 1647, and contains the most venerable oaks in the forest, some of which have been given familiar names, as is the tradition. The Muriel oak, for instance, is a tribute to a courageous forest ranger who joined the Resistance movement and died during deportation in 1944. It can happen that a mere stump bears the memory of some remarkable tree, such as the Boppe oak, which was struck by lightning in 1934. Since then the Roulleau de la Roussière oak, the Potel oak, and the Lorne oak, all names of inspectors of the National Forestry Commission who watched over them in the past, have taken their place.

The ONF effectively perpetuates the heritage of the Maîtres des Eaux et Forêts of the Middle Ages. Long property of the counts of Anjou, and then of the Rohan family, Bercé was incorporated into the royal domain by Charles IX, who bought it in 1563. Subsequently benefiting from the great forest reforms launched by Colbert, it was enlarged by the acquisition of the moors of Grammont and Haute Perche. Bercé is one of the woodland massifs that was awarded the “Exceptional Forest” status by the ONF in 2017. The GR 36 hiking trail that crosses it to the west is trodden by many ramblers who gaze in wonder at its collections of three hundred-year-old oaks.

The European Union has listed several areas “Zone Natura 2000” in recognition of their exceptional flora and fauna. These include stag’s-horn clubmoss, a medicinal herb whose spores possess curative properties, and the green snaketail (Ophiogomphus cecilia), a delicate dragonfly whose presence is a clear indicator of water purity. Rivers and ponds contribute to the hydric balance of the Atlantic forest. Rainfall here is not especially abundant (690 mm or 27½ in/year), and certain brooks run dry in summer. This though is not the case with the Source de l’Hermitière and the fountain of the Coudre, which marks the starts of a nature trail that crosses sequoia woods. In spite of the prevalence of oak, Bercé offers great diversity. This can be appreciated at the village of Jupilles, where a learning center dedicated to man and the forest, the Carnuta, stages many events.

To celebrate the union between the oak and the Chenin grape, two winegrowers of the Coteaux du Loir to the south of the forest of Bercé, Michelle and Christophe Croisard of the Domaine de la Raderie, have created a special cuvee which they have named Chenin en Bercé. Housed in 400 liter (c.105 gal.) barrels made by Vicard from 220 year-old oak, this sweet wine from the 2010 vintage is a concentration of the Loire valley terroir, based on the geographical proximity of wood and wine. The ONF has also formed a partnership with Martell Cognac, a patron of Bercé, many of whose prime oaks are transformed into barrels by the Leroi cooperage in Cognac. “We have tested wood from Bercé, Tronçais, and the Vosges, and the Bercé batch came top of the class,” assures Christophe Valtaud, cellar-master at Martell. “It brings incomparable finesse to the cognac, with subtle vanilla and coconut notes.” 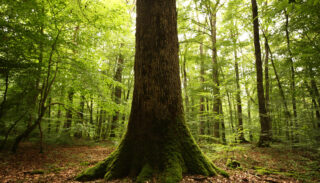 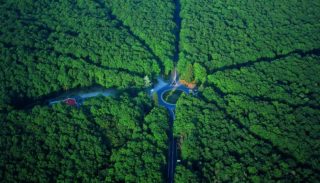