The exchange of vows and gifts on the occasion of the New Year (on a date varying according to the periods and to the regions) is a century-old tradition. Indeed, pictures of those traditions have been discovered on ancient Egyptian papyri and on Roman objects from daily life as oil lamp.

In the West, sending greeting cards for New Year was born in the convents in the Middle Ages. This tradition is even older in China where greeting cards were made on pieces of rice paper.

Greeting card, as it is generally understood today, was born in England in the middle of the 19th century. In 1843, Sir Henry Cole would have sent the first modern greeting card with the now famous expression: “A merry Christmas and a happy new year to you”. This English  custom then rapidly extended to all Europe.

Following its responsible approach, Charlois group decided this year to give preference to an electronic version of its traditional greeting card. As a matter of fact, 72 millions of paper greeting cards are sending each year in France. Tradition that has a real environmental impact if we consider transport, stationery, ink and energy.

Whether it is one sent by postal service or by email, greeting card allows sign of interest to be addressed to close relatives which usually really appreciate that kind of attention.

6 – The forest in Nivernais – Forest House 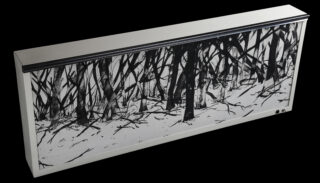