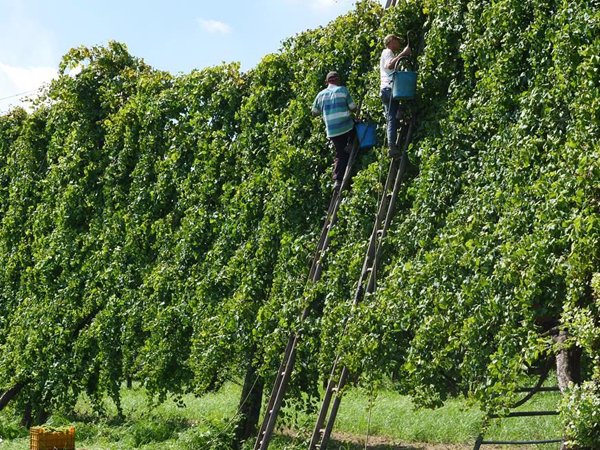 Agroecology* constitutes a set of practices aimed to conceive production systems differently by oftenly reintroducing into them what once existed. Agroecology is therefore opposed to the model of intensive monoculture which, in the wine sector, results in monoculture vineyards in rows.

The ancestral wine-growing practices linked to the tree, whether for when it served as a guardian or when it was co-planted, could play an essential role in this return to biodiverse viticulture. As long as the players in the sector found a viable economical model.

The article on to which we have lent ourselves and which appeared in the Revue des Œnologues invites us to (re) discover ancestral wine-growing practices, today closely studied by scientists to measure the effects of companionship between trees and vine.

Because that is the whole point of the studies carried out recently in the co-planted vineyards: measuring whether the contributions of the trees to the vines are greater than their constraints, particularly in terms of water or nitrogen competition and in terms of lighting. And thus allow the tree to regain its full place in the vineyards, as it was the case in the past with the management of the vine on trees or cultivation in haughty, the co-plantation or even the “joualle” **.

* For the Ministry of Agriculture and Food, “agroecology reintroduces diversity into agricultural production systems and restores a diverse landscape mosaic (eg: diversification of crops and extension of rotations, establishment of agro-infrastructures -ecological …) and the role of biodiversity as a factor of production is reinforced, even restored. ”

** Vines planted in order to leave strips of land for other crops, such as fruit trees for example.

Visual 3: Agrovitiforestry in the departmental estate of Restinclières (Hérault) © D.R.