< Back to news
Colbert and the Nièvre

Act 5 The difficult reorganisation of the Duchy of Nièvre

Cardinal Mazarin’s private secretary, in charge of his possessions and his immense fortune, Colbert takes possession of the Duchy of Nièvre on behalf of Mazarin in 1659.

During Autumn 1660, Colbert starts a second journey in the Duchy to implement the necessary reforms for its reorganization.

Once there, he sends a letter to Mazarin on 14 October 1660 to tell him how magnificent the Duchy is. Colbert makes specifically reference to the high forestry potential of the Duchy that he had already understood the previous year initiating the reform of its woods and forests.

However, a few days later, on 17 October 1660, he realized all the problems he has to face with visiting the Châtellenie of Clamecy. Among those problems, the reinstatement of the rights of use is the most complicated to establish.

Back to Nevers, Colbert lists what he has to do to increase Duchy revenues. One of these points concern the reform of woods and forests. A reform introduced more than 360 years ago which allowed the Nièvre’s forests to become one of the most valuable forests for the manufacture of oak barrels.

Pictures: Portrait of Jean-Baptiste Colbert painted by Philippe de Champaigne and extract from the Cassini map.

Colbert and the Nièvre, Culture

Act VI The end of the journey 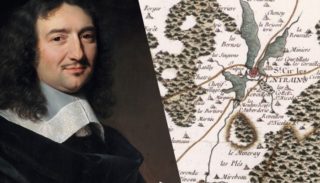