4 – The Forest in Nivernais – Splitters at work 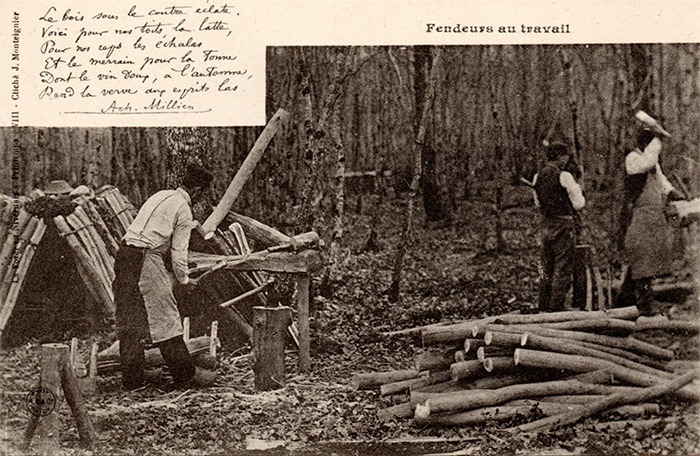 The fourth postcard of the series « The Forest in Nivernais » shows a group of splitters working in the forest as it used to be.

The fourth postcard of the series « The Forest in Nivernais » shows a group of splitters working in the forest as it used to be. The photograph was taken by Jules Monteignier, a Nivernais artist close to Achille Millien, who served as mayor of Dompierre-sur-Nièvre at the end of the 19th century.

In the foreground, a man splits wood in front of a workshop (workbench) made from pieces of wood directly collected at the cutting site. Several tools are arranged around him, including a wooden mass and a coulter. We also note the presence of bundles tied up next to the splitter, probably made up of stakes for the staking of the vines. The size of logs piled up waiting to be split also suggests that the splitters are busy splitting stakes for vine-growing or slats for covering buildings.

Achille Millien embellishes the postcard “Spring VIII – Splitters at work” of some verses on the splitting activity and the different uses of split wood: « Le bois sous le contre éclate. / Voici pour nos toits la latte, / Pour nos ceps les échalas / Et le merrain pour la Tonne / Dont le vin doux, à l’automne, / Rend la verve aux esprits las. »  Millien confirms in this poem the use of the “latte” for the roofs of buildings in the Nivernais region. The lath here certainly designates the batten and not the shingle (“tavaillon” or “aissiaume”). The batten is intended to receive the covering material, the set of laths or battens being called lattice. Whether it was the batten or the shingle, these two pieces of wood were intended to the same craftsmen, namely the roofers for the realization and laying of a building roof. 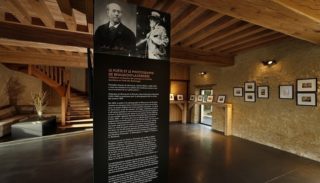 The poet and the photographer of Beaumont-la-Ferrière 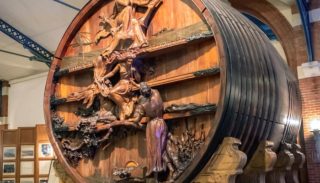 L’Atelier du Foudrier, the complete mastery of the art of producing huge casks and vats