The third postcard of the series « The forest in Nivernais » features a group of three women weighed down with dead wood. The photograph was taken in Beaumont-la-Ferrière, a village bordering the Bertranges forest.

The third postcard of the series « The forest in Nivernais » features a group of three women weighed down with dead wood. The photograph was taken by Vicomte Raoul Saulnier d’Anchald in Beaumont-la-Ferrière, a village bordering the Bertranges forest, on the road leading to Beaumont castle. The two towers we can make out, are the remains of the 15th century castle. They still frame today the monumental entrance gate of the manor built in 1850 in the middle of the park of the old castle of Beaumont.

Of the three women, two carry on their back an impressive hood filled with dead wood while the third pushes a wheelbarrow loaded with branches too. At the photograph’s time (late 19th century), the collection of dead wood in state-owned forest is governed by the decree of September 19, 1853 which states that « The forest administration is authorized to concede, upon Mayors request,  the right to pick up dead and dry wood free of charge to the poor inhabitants of the villages bordering the forests subjected to the forest regime. »

The National Forests Office advocates today to leave dead wood on the ground because it protects the soil and, by decomposing, helps humus that will enrich the soil and ensure the natural renewal of the forest. The collection of dead wood is therefore currently prohibited and punishable by a fine. 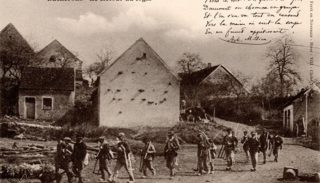 22 – The Forest in Nivernais – Loggers – Coming back home 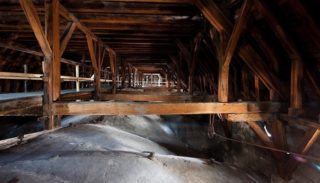 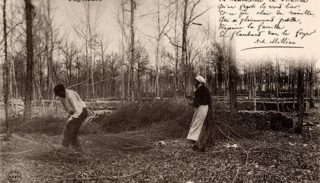 21 – The Forest in Nivernais – Bundle of wood makers